"Whose praise Great Britain always chants, And so his cousins, And his sisters and his aunts" 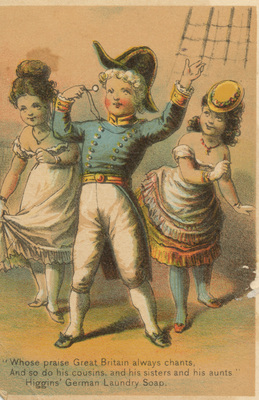 [recto:] "Whose praise Great Britain always chants, / And so do his cousins, and his sisters and his aunts" / Higgins' German Laundry Soap. [verso:] [HIGGINS'] GERMAN LAUNDRY SOAP / IS THE BEST / For Laundry and Family Use. / The extent to which the adulteration of Soap is carried on / is not realized, or even suspected, by one person in a thou- / sand, nor are the evil effects which result from its use / appreciated as they should be. / Within the last few years, the use of large quantities of / Silex, Clay, Lime, Gypsum, and other mineral adulterations, / has become general among a certain class of manufacturers, whose / lack of capital, business incapacity, or inherent dishonesty, has / made them unable or unwilling to compete on fair terms with / their more honorable neighbors. / The result is that the market has been flooded with so-called / low priced Soaps, and the public has been cheated into paying its / money for articles which were almost worthless [...]