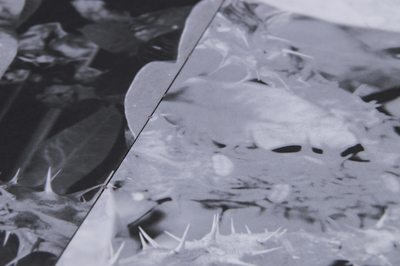 “…I looked and saw, between him and me, that is to say, on his right and my left, a hedge of such length that I could not see the end of it, either ahead or behind. The top of this hedge was bristling with such large thorns that there seemed no way to get back to [him].” – Gertrude of Helfta, c. 1289 In this vision, the first of many, the twenty-six year old German nun Gertrude of Helfta sees Jesus on the other side of a long hedge, “bristling with such large thorns.” She tries to get through it herself before Jesus lifts and carries her over it. This book is composed of large-format photographs of Euphorbia Mili, a plant more commonly known as Crown of Thorns. Native to Madagascar, this plant was brought to the Middle East in ancient times and legend says it was used to make Jesus’ crown of thorns.