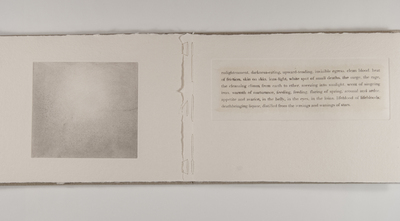 Artist Book with aquatint and chine-collé on hand-made paper

Elements is a collaborative project between M. Benjamin Herndon and Juli Anna Herndon, inspired by a 1975 portfolio of four untitled lithographs by Vija Celmins that can be understood as representing four elements. Each of the four poems addresses on elements as its subject, with special care give to how each is perceived emotionally. Each of the four aquatints were made with one dominant element in the formation of each image-for instance, a puff of air displaced the acid-resistant rosin for the "air" plate; "Water" was made in a bath of water into which the mordant was slowly added, etc. Echoing Celmin's prints being on hand-made paper, the papers in the book are hand-made (the Japanese paper was made by M. B. Herndon). Care was given to the material and aesthetic choices of the binding- four linen tapes for the four elements, and a sewn-detail references each element, in the center-most joints between pages.