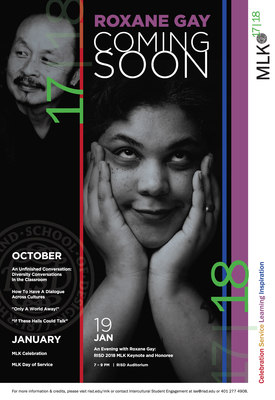 MLK 2017|18 Visiting Speaker, Chinese American documentary film maker, author, poet, Asian storyteller, educator and community therapist Lee Mun Wah leads multiple events including the workshop "An Unfinished Conversation: Diversity Conversations in the Classroom", the student dinner/dialogue "How to Have a Dialogue Across Cultures", the lecture "Only A World Away!" and the lecture/film screening "If These Halls Could Talk". "It is Lee Mun Wah’s belief that we cannot wait until tomorrow for some charismatic leader to appear who will bring us all together. We each must take a stand and personally participate in this important journey of confronting our fears and beginning a conversation not only with those we love but also with those we have been taught to fear. We cannot continue being separate and unequal without there being a cost to each and every generation. Our survival and the very future of our children depend on all of us embracing our differences as well as our mutuality. If we can accomplish this in our lifetime, we can then look back and know that we have found a way to live together authentically and harmoniously, using and honoring all of our gifts and special contributions. To Lee Mun Wah, that is the true meaning of multiculturalism." - Stirfry Seminars and Consulting

Roxane's writing is unmatched and widely revered. Her work garners international acclaim for its reflective, no-holds-barred exploration of feminism and social criticism. With a deft eye on modern culture, she brilliantly critiques its ebb and flow with both wit and ferocity. Words like “courage,” “humor,” and “smart” are frequently deployed when describing Roxane. Her collection of essays, Bad Feminist, is universally considered the quintessential exploration of modern feminism. Roxane is a contributing op-ed writer for The New York Times, w co-editor of PANK, and formerly w non-fiction editor at The Rumpus. Her writing also appeared in McSweeney’s, The Nation and many other publications. She recently became the first black woman to ever write for Marvel, writing a comic series in the Black Panther universe called World of Wakanda. Roxane fronts a small army of avid fans on social media and when she finds the time, she dominates the occasional Scrabble tournament.