That extra something! | Coca-Cola ad 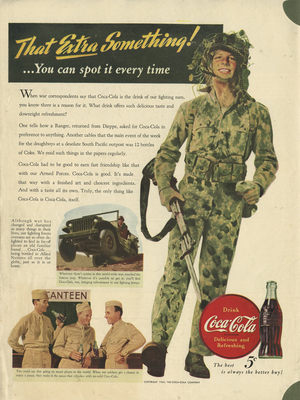 [top middle]: That Extra Something! / ...You can spot it every time; [top bellow]: When war correspondents say that Coca-Cola is the drink of our fighting men, / you know there is a reason for it. What drink offers such delicious taste and / downright refreshment? / One tells how a Ranger, returned from Dieppe, asked for Coca-Cola in / preference to anything. Another cables that the main event of the week / for the doughboys at a desolate South Pacific outpost was 12 bottles / of Coke. We read such things in the papers regularly. / Coca-Cola had to be good to earn fast friendship like that / with our Armed Forces. Coca-Cola is good. It's made / that way with a finished art and choicest ingredients. / And with a taste all its own. Truly, the only thing like / Coca-Cola is Coca-Cola, itself.; [bottom left]: Although war has / changed and disrupted / so many things in their / lives, our fighting forces / overseas are so often de- / lighted to find in far-off / places and old familiar / friend... Coca-Cola... / being bottled in Allied / Nations all over the / globe, just as it is at / home.; [You could see this going on many places in the world. When our soldiers get a chance to / enjoy a pause, they make it the pause that refreshes with ice-cold Coca-Cola.; [bottom right]: Drink / Coca-Cola / Delicious and / Refreshing; [bottom right bellow]: The best 5¢ / is always the better buy!