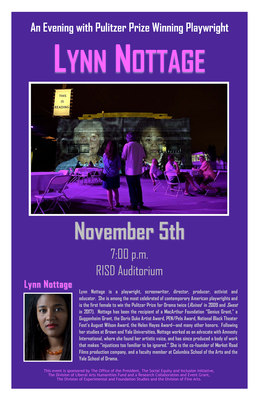 Monday, November 5th, 2018 at 5pm in the RISD Auditorium. The President’s Office and Social Equity and Inclusion Initiative welcome Pulitzer prize-winning playwright, screenwriter, director, producer, activist and educator Lynn Nottage to RISD. Nottage engages some of our most intractable problems, both on and off the stage, and her practice is characterized by extensive research while writing and continued involvement with subject communities once the work is complete.This event is sponsored by the Office of the President, the Social Equity and Inclusion Initiative, the Division of Liberal Arts Humanities Fund and a Research Collaboration and Event Grant, the Division of Experimental and Foundation Studies and the Division of Fine Arts.

Lynn Nottage is among the most celebrated of contemporary American playwrights and the first female to win the Pulitzer Prize for Drama twice (for Ruined in 2009 and Sweat in 2017). She has been the recipient of a MacArthur Foundation “Genius Grant,” a Guggenheim Grant, the Doris Duke Artist Award, PEN/Pels Award, National Black Theater Fest’s August Wilson Award, the Helen Hayes Award and many others. Following her studies at Brown and Yale Universities, she worked as an advocate with Amnesty International, where she found her artistic voice, and has since produced a body of work that makes “injustices too familiar to be ignored.” She is a co-founder of Market Road Films production company and a faculty member at both Columbia School of the Arts and the Yale School of Drama.