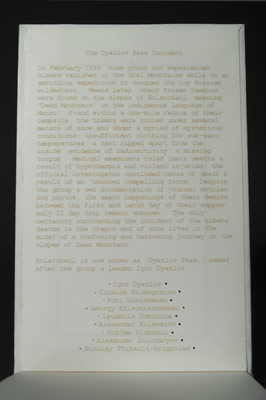 In February 1959, nine young and experienced hikers vanished in the Ural Mountains while on an ambitious expedition to conquer the icy Russian wilderness. Weeks later, their frozen remains were found on the slopes of Holatchahl, meaning "Dead Mountain" in the indigenous language of Mansi. Found within a one-mile radius of their campsite, the hikers were buried under several meters of snow and under a myriad of mysterious conditions: insufficient clothing for sub-zero temperatures, a tent ripped apart from the inside, remnants of radioactivity, a missing tongue. Medical examiners ruled their deaths as a result of hypothermia and violent injuries; the official investigator concluded cause of death a result of an "unknown compelling force." Despite the group's own documentation of journal entries and photos, the exact happenings of their demise between the first and tenth day of their supposedly 23 day trip remain unknown. The only certainty surrounding the incident of the hikers' deaths is the tragic end of nine lives in the midst of a confusing and harrowing journey on the slopes of Dead Mountain. Holatchahl is now known as "Dyatlov Pass", named after the group's leader Igor Dyatlov. The book is designed to convey the distressing, perplexing, and tragic journey of the Dyatlov group. Each panel represents an elevation of Holatchahl, with evidence of the hikers hidden within the pages.