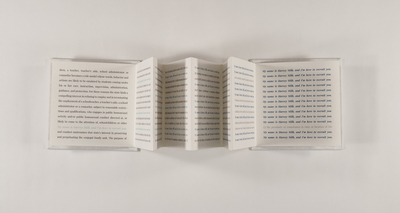 Printed on watercolor paper, bound with bookbinding board and bookcloth.

This book is a tribute to the public speaking skills of Harvey Milk, openly gay city supervisor of San Francisco, California. In 1978, he was able to swing the voting public's opinion of anti-gay Proposition 6 which attempted to ban gay teachers from teaching in schools. While it was an initially popular proposition, Milk was able to raise enough opposition against it and it was overturned.