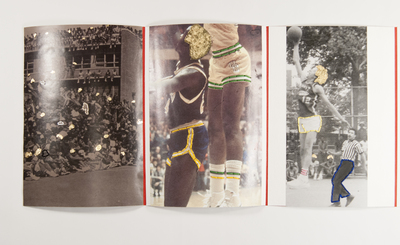 I began the Past is Prologue series as news of Michael Brown's murder by police officer D. Wilson became public. I have family in Ferguson and have spent all my childhood and young adulthood in this place. Seeing this even unfold in a town so familiar felt like the murder of a family member. As a person of color, this public killing and aftermath made it all too clear that this can happen to any one of us no matter how safe we think we are. It is an open season on female and male black and brown bodies here in the U.S. and much of my work discusses this is public forum. Creating Past is Prologue became a meditative process and practice for me, which resulted in an ever-growing number of pieces. I continue the work as I learn of more casualties in the community. The process by which I lovingly gold leaf the hair of black and brown men and embroider the works speaks to my desire to add more value to lives that are so casually snuffed out. Black people are worthy of love, respect and adoration. This process juxtaposed with the images of people who are commodified on the court and celebrated as kings, yet profiled and slaughtered in the streets seeks to investigate how black men are both revered and feared.